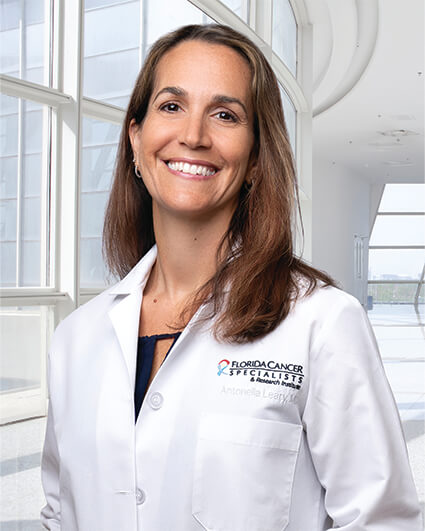 Prior to beginning her private practice, Dr. Antonella Leary served as an Assistant Professor of Obstetrics and Gynecology at the University of Massachusetts for five and a half years, where she was also the head of minimally invasive surgery and robotics. She is a Principal Investigator with the national Gynecologic Oncology Group, whose primary focus is to develop and evaluate clinical trials centered on female malignancies.

Dr. Leary’s key focus is on female malignancies, including cervical, vulvar, uterine, and ovarian carcinomas. She has presented her research to numerous professional organizations, such as the Society of European Robotic Gynecological Surgery (SERGS) and the New England Association of Gynecologic Oncologists (NEAGO), and has published in several well-respected peer-reviewed journals, including Thrombosis Research, Women’s Oncology Review, Gynecologic Oncology and the American Journal of Clinical Oncology.

Fluent in Italian and proficient in Spanish, Dr. Leary has volunteered in underserved communities in the Dominican Republic, Mexico and on Native American Reservations in the U.S., providing educational and medical services to indigenous populations. In her leisure time, Dr. Leary enjoys running, skiing, playing piano, cooking and travel.

In the Know: Ovarian Cancer Facts with Dr. Leary