When Peggy Moore was diagnosed with pancreatic cancer early in 2020, she and her husband, Brian, had to prepare for a grueling fight to survive one of the most difficult cancers of all.

Relying on their faith and the expertise of Dr. Vikas Malhotra, a medical oncologist who practices at the FCS Brooksville and Spring Hill locations, they never lost hope.

This was not the first time Peggy and Brian had faced a cancer diagnosis and they knew it would be a long battle. They also knew their love and marriage had already conquered time and distance, so they were prepared to persevere.

The couple first met almost 50 years ago, when Brian was a 26-year-old Peace Corps volunteer in Lima, Peru. Born in Hartford, Connecticut, Peggy had moved to Peru at the age of five with her Peruvian father and American mother, who was the Peace Corps office manager.

Brian recalls, “Peggy’s mother would occasionally invite some of us volunteers for a home-cooked meal and I remember Peggy as a bright and attractive 14-year-old girl. I spent several years in South America in the Corps and I became friends with the family. We kept in touch after we moved back to the U.S.”

Life went on and Peggy grew up, married and started a family in Florida. Brian remained a bachelor.

After Peggy’s husband passed away in 1998, their ongoing friendship blossomed into a romantic relationship. The couple dated for almost five years before then 60-year-old Brian asked Peggy to be his bride in 2003 –34 years and an entire continent away from where and when they had first met.

In 2012, Peggy was diagnosed with stage 3 breast cancer and was referred to Florida Cancer Specialists and Dr. Malhotra. She wanted to be treated close to home. Unsure whether a community oncology practice would have the most advanced treatments, she sought a second opinion from a large academic medical center over an hour’s drive away. That second opinion concurred with everything Dr. Malhotra had told her and so she began treatment at FCS.

Brian accompanied her to every visit, treatment and follow-up appointment. By 2018, Peggy’s cancer was in remission.

Then, early in 2020, Peggy noticed a discoloration in her urine. When it did not clear up, Brian convinced her to see a doctor, who referred her to a local hospital ER. There, she underwent several tests and scans before the ER doctor told her, “You have a tumor on your pancreas. Get your affairs in order, you have three months to live.”

Peggy remembers the shock and fear. She and Brian immediately called Dr. Malhotra. “Dr. Malhotra was outraged when I told him what the ER doctor said to me,” Peggy says. “He pointed out that the ER physician did not know my medical history and likely was not aware of some of the most recent breakthroughs in treating pancreatic cancer.”

Dr. Malhotra gave the couple some much-needed reassurance and hope. He explained that because Peggy’s tumor was located on the head of her pancreas, she had a much better chance for survival than most patients. He proposed aggressive chemotherapy treatment followed by a complex surgery known as a Whipple procedure.

“We trusted him implicitly,” Peggy says. “Dr. Malhotra was honest and direct with us. He explained the risks and the survival rates and that he had had some success with this kind of approach… so we put my life in his hands.” Brian adds, “I put my life in his hands too. I waited over 30 years for Peggy, and I wasn’t ready to lose her.”

Following chemotherapy, Peggy underwent the Whipple surgery, which typically removes the head of the pancreas, the first part of the small intestine, the gallbladder and the bile duct. It is a difficult operation and can have serious risks; however, the surgery can be lifesaving.

When the tumor was removed and biopsied, there was no sign of cancer. Peggy’s surgeon credits the good outcome to Dr. Malhotra’s use of a personalized chemotherapy regimen for Peggy that reduced the cancer prior to the surgery. Brian agrees and says, “We think his treatment plan was responsible for Peggy’s recovery and good health.”

Today, almost a year later, Peggy is cancer-free. She gets follow-up blood work every two weeks and goes in every six months for a check-up to make sure everything is going well. The couple is eager to share the advice that has helped them navigate time, distance and cancer, as they look toward the future together. “Take it one day at a time…and don’t believe everything you read on the Internet or you’ll drive yourself crazy. Keep your faith and don’t give up hope.” 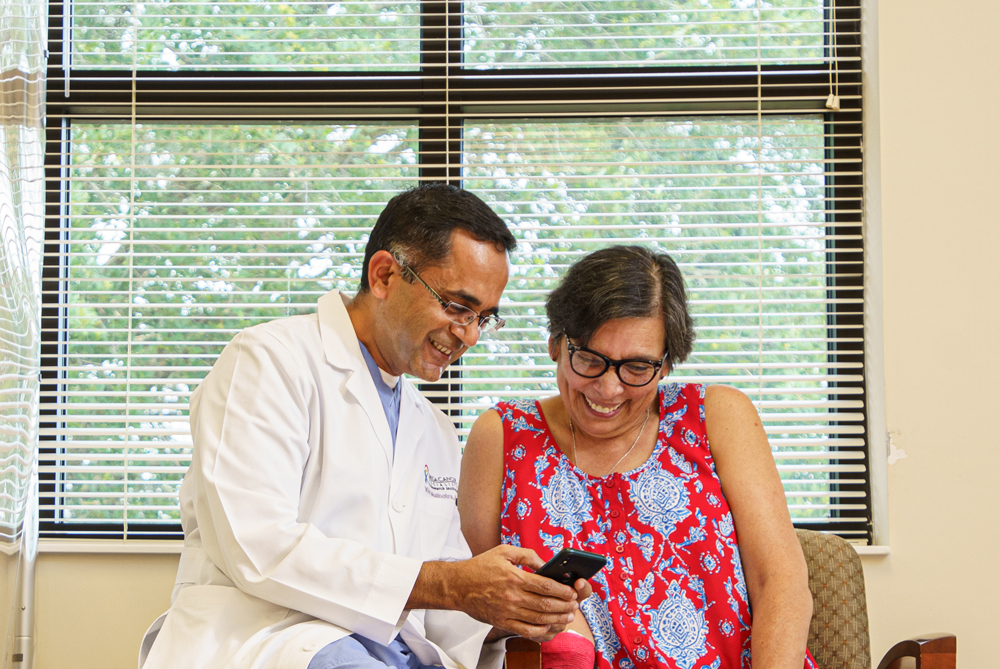