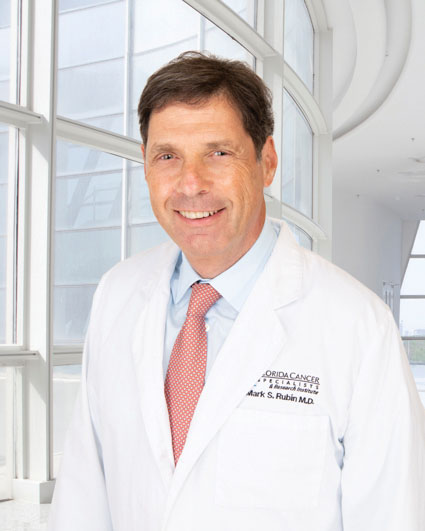 While in his final year of college at Harvard University, Dr. Mark Rubin was considering a career in either law or medicine. He made his choice shortly after his sister was diagnosed with acute leukemia. Oncology provided him the opportunity to help heal people.

Throughout his career, Dr. Rubin has worked alongside cancer experts whose research has contributed to what he calls “the revolution in understanding cancer cell dynamics” and has led to the development of targeted therapies that he is able to personalize for his patients with great precision to achieve the best possible outcomes.

Dr. Rubin revolutionized the care of colon cancer with his development of targeted therapy (Erbitux) based on his cell receptor signaling research at Memorial Sloan-Kettering Cancer Center and presented at the national oncology conference of the American Society of Clinical Oncology (ASCO). He also wrote and developed OncoEMR, which is the leading community oncology electronic medical records system in the United States, and through his efforts enhanced and streamlined the care of cancer patients nationally.

Dr. Rubin has extensive experience as a principal investigator and sub-investigator on numerous Phase I, II and III clinical research trials. He joined Florida Cancer Specialists in 1994 and served as Director of Clinical Research from 1998-2002.

Dr. Rubin is Board-certified in Medical Oncology, Hematology and Internal Medicine. He has been named as a Top Doctor in Southwest Florida by Castle Connolly since 2004.

From Poor Prognosis to Living His Best Life

The healthy, active, 54-year-old father of two, John Sodeika, was shocked when he received an advanced gastric cancer diagnosis in 2019. Thanks to his loving family and friends, positive attitude, and treatment from Dr. Rubin, Dr. Wang, and his Florida Cancer Specialists & Research Institute team, he is off treatment and living his life to the fullest!

Dr. Rubin, featured in a local television campaign, talks about how — at FCS — he treats people not statistics.